Already more than a century ago, the Japanese beetle (Popillia japonica) has been introduced to New Jersey and has since then developed into a major plant pest in the US. Only recently, it was introduced to Northern Italy and continues to spread. The beetle is eager to feed on hundreds of ornamental plants, fruit trees and berries, vegetable plants, forest trees and arable crops. The adult beetles are only active for a couple of weeks in the summer, but their larvae, typical “grubs”, live underground for the rest of the year, which makes Japanese beetles especially difficult to eradicate.

About the Japanese beetle (Popillia japonica)

Already more than a century ago, the Japanese beetle (Popillia japonica) was introduced to New Jersey and has since then developed into a major plant pest in the US. Only recently, it was introduced to Northern Italy and continues to spread. The beetle is eager to feed on hundreds of ornamental plants, fruit trees and berries, vegetable plants, forest trees, and arable crops. The adult beetles are only active for a couple of weeks in the summer, but their larvae, typical “grubs”, live underground for the rest of the year, which makes Japanese beetles especially difficult to eradicate.

How to identify a Japanese beetle

Like typical beetles, Japanese beetles have hardened fore wings, so-called elytra, which are not used for flying but cover the hind part of the insect’s body. These elytra are copper-brown. With their transparent hind wings, they are able to fly but are clumsy flyers and often bonk into objects. Their oval body is about 10 mm long (that’s smaller than a 1-Eurocent-coin, measured without legs!). The head and thorax (middle part) of their body are shimmering in metallic bronze or green, and their wing coverings are copper-brown. Toward their back end, a row of five patches of white, bristle-like hairs covers each side of their body, and there are two white patches on the tip of their back end. The white patches easily distinguish the adult Japanese beetle from other beetles that resemble it. Have a look at our field identification guide to check characters in detail. The grubs (larvae) that develop in the ground cannot be distinguished from similar native grub species without the use of a binocular.

From Asia to North America and Europe

As its name implies, the Japanese beetle originates from northern Japan and the far east of Russia. There, it is a minor pest as it has several natural enemies. Additionally, the local climate and environmental conditions help to prevent massive population growth. In 1916, the Japanese beetle was first discovered in the US, probably introduced with plant material from Japan. After this first discovery outside of its home range, the beetle moved to several other countries, always causing severe damage. Since it was first spotted in northern Italy in 2014, it has rapidly expanded its range, and population levels have exploded. Only four years later, it was discovered for the first time at the southern border of Switzerland in 2017, and continued to spread northwards.

Adult beetles generally feed on leaves, chewing out the tissue between the veins, only leaving the leaf skeleton. They feed on more than 300 plant species, including vegetable crops, flowering plants, trees, and shrubs. They show a preference for leaves of grapes, fruit-bearing trees, and soy. Besides leaves, they also feed on ripe fruit of mean host plants, for example, plums, cherries, raspberries, blueberries, or apples, and they may even feed on flower petals, for example, rose blossoms. Depending on food supply, they can also feed on the leaves of forest trees, including hazel nut, oaks, or linden.

The damage by Japanese beetles is not limited to their adult form. Their larvae feed underground just below the surface, where they consume roots and thereby reduce the vitality and yield of their host plants. These grubs prefer roots of lush pasture and turfgrass but can also feed on roots of maize, beans, tomatoes, strawberries, or nursery seedlings. Predators such as wild boars or crows use the grubs as a food source and cause secondary damage when digging for them. The digging can cause more disruption to the sward than the initial damage by the grubs.

“Is this a Japanese Beetle?” – that’s the question we hear and read hundreds of times yearly. In most cases, we can tell within seconds that it is not. Do you want to know how this works? Then try yourself with our new identification tool! Our easy-to-use field identification key will show you how to discriminate between the Japanese Beetle and its most abundant European relatives.

Seasonal development of the Japanese Beetle

In regions with a moderate climate, there is one generation of Japanese beetles yearly. The peak flight of adult P. japonica is in July, but adults may be active from Mid-May until September, depending on climate and weather conditions. Females live 30-45 days and can lay up to 60 eggs in this period, preferably in the moist, loamy soil of pastures, meadows, or lawns.

The economic impact of the Japanese beetle

The Japanese beetle is a polyphagous species, meaning that it can feed on numerous host plants/crops. This makes the beetle a threat to agriculture, as its diet also includes important crops such as maize or soy. By feeding on the leaves and the ripe fruit of host plants, the adult beetle harms plant photosynthesis abilities and reduces farmer´s yield and harvest quality. Furthermore, Japanese beetle larvae can also cause substantial damages. The grubs develop beneath the soil and feed on the roots of plants or turf. The damages of the larvae to turf and grassland adversely affects sports facilities such as soccer fields and/or golf courses.

The Japanese beetle has over 300 different host plants/crops, implying a wide variety of plants to feed on. Some of these host plants/crops such as soybeans, grapes, apples or blueberries are of economic importance to farmers. Depending on the availability of host crops, the beetle can also feed on the leaves of trees such as hazel nut, oaks, or linden. For a full list of Japanese beetle host plants including classifications into main or secondary host, see Tayeh et al. 2022.

Yield loss estimates from the literature

Depending on the Japanese beetle’s preference for a specific crop, the infestation level and the availability of plant protection products, estimated yield loss can vary greatly. An overview of yield loss estimates for some of the beetle’s main host plants/crops is presented below. Caution should applied to the interpretation of these figures, given that these yield loss estimates depend on the particular study framework and cannot be generalized. 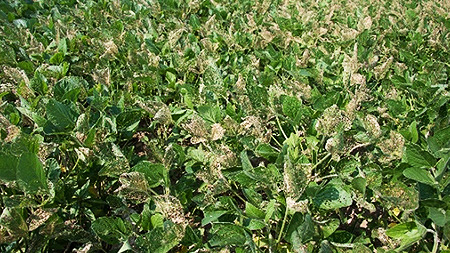 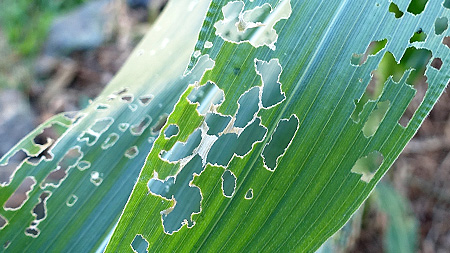 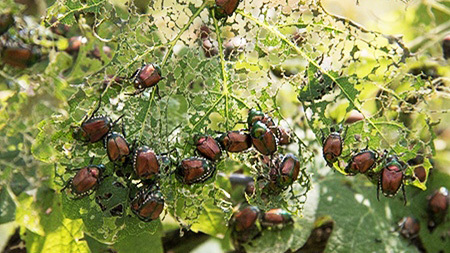 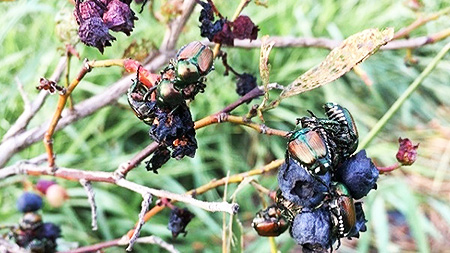 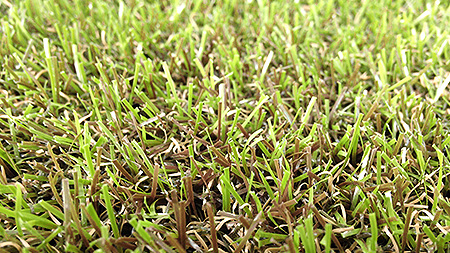 The total economic damage caused by the Japanese beetle is composed of direct and indirect economic losses and costs, such as

Currently only few studies have tried to estimate above-mentioned costs. According to USDA/APHIS (2015) costs for the control of the Japanese beetle in the US exceed US$460 million per year. In the European Union, the beetle has been ranked the second most important quarantine pest for crops due to its potential severe economic, social and environmental impacts. Even though no extensive damage has officially been reported for the case of Europe, a recent study of the IPM Popillia project found that the potential damage costs could be substantial. The potential yield damage to six main host crops of the beetle ranges from €30 million to €7.8 billion per year. Large grape and wine producing countries like France or Italy would be affected with potential annual damage costs of around €92 million and €62 million, respectively.